William Wyler and John Sturges, Hollywood during the war

Starting from 21st June 1943 Battipaglia was bombed by the Allies but it was only the beginning of a very hard period because the city became a target like many Italian cities. The aim is to weaken the prestige of the regime because the area has not yet been identified as the theatre of the landing.

On the 9th of September the city becomes one of the main targets of both the Allies and the Germans and this determines its destruction and disseminates grief among the population. 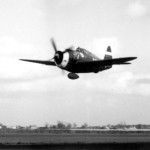 War is propaganda and World War II is, indeed, the first conflict in which it is massively used. The documentary   “Thunderbolt“, filmed in 1947, has two peculiarities: the first concerns the characters of the show business involved and the second is that some scenes were shot during the bombing of Battipaglia.

The title derives from the name of the single-seat bomber P-47 Thunderbolt and the documentary celebrates the deeds of its pilots, of which Battipaglia, like many other cities, was a helpless and innocent victim. The director of “Roman Holiday” and “Ben Hur”,   William Wyler, had cameras placed on the planes (their positioning can be seen in the documentary) and he used some scenes to edit Thunderbolt. Wyler collaborated with another great director,  John Sturges (“The Old Man and the Sea”, “Gunfight at the O.K. Corral”) and won the participation of the famous actor James Stewart.

This experience on bombers during the war (he also made “Memphis Belle” on the famous Flying Fortresses and “the Fighting Lady“) inspired him for the film “the best years of our lives”, which earned him the Oscar.

Thunderbolt actually tells of a later period, namely May 1944 when the approach march to Rome with airplanes based in Corsica took place, but as described on wikipedia, it contains images of Wyler’s experience in Salerno in 1943.